The Paper Excellence Group, through its wholly-owned subsidiary Domtar Corporation, and Resolute Forest Products Inc. (NYSE: RFP) (TSX: RFP), have entered into an agreement under which Domtar will acquire all of the outstanding common shares of Resolute stock. With this addition to its family of companies, the Paper Excellence Group will further build out its portfolio in North America following the successful acquisition of Domtar last year. Resolute will become a wholly-owned subsidiary of Domtar and continue to operate on a business-as-usual basis under the Resolute name. The Resolute management team will remain in place at the company’s headquarters and the Paper Excellence Group plans to retain Resolute’s production locations and levels of jobs. The transaction is expected to close in the first half of 2023.

A major energy crisis in Europe has been averted for now with Norway’s government intervening to end a strike in the nation’s energy sector that had reduced oil and gas output. Norway is Europe’s second-largest energy supplier after Russia. The strike had added to the fears of a significant energy crisis across Europe, where Russian export cutbacks have reduced natural gas supplies, and fuel prices have soared in recent weeks. The situation is so tenuous that Germany is putting contingency plans in place in case its gas supplies — traditionally sourced from Russia via Nord Stream 1 — are cut off by Moscow. This would have significant implications for a number of industries (as well as consumers) and could send the German economy further into recession, pushing paper & board production down. Given Germany’s dominant manufacturing capacity a heavily reduced output of the domestic paper & board industry could impact the availability of these much needed products throughout Europe, and further negatively affect global supply chains.

RISI continues to expect substantial further upward movement for coated paper prices in 2022, especially for the coated freesheet prices that did not rise in June, and for coated mechanical prices to climb another $100/ton by early 2023. RISI now anticipates some further upward movement for uncoated freesheet pricing in 2022 due to the strength of operating rates over the past several months. Newsprint and non-SC uncoated mechanical price forecasts have both shifted to their previous highside scenarios, with leading producer Resolute announcing two-stage increases for August and September. Supply remains tight due to capacity closures and conversions. About 1.3 million tons of UFS capacity have left the North American market since 2020. Almost 1 million tons of CFS capacity was removed in 2020-2022, while CM capacity was reduced by 700,000 tons and uncoated mechanical (UM) capacity dropped almost 800,000 tons in the period. With input costs still high the environment remains ripe for continued price appreciation. 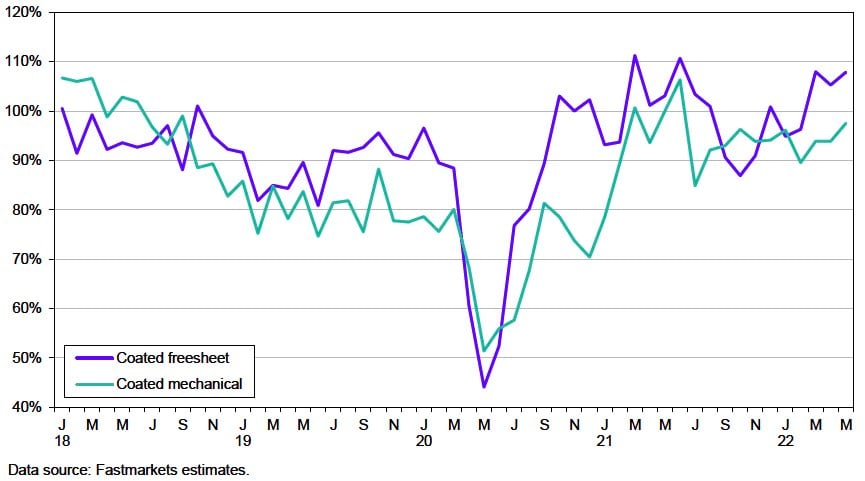 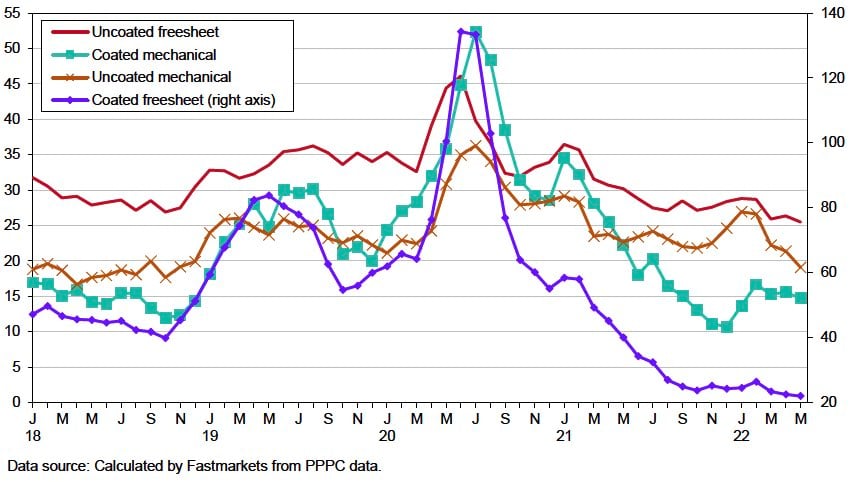